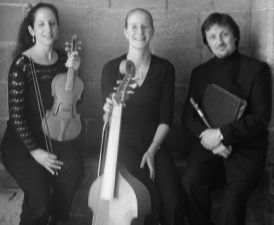 Passamezzo at Hengrave Hall, May 2004.
Photograph by David Garioch.

Our gallimaufry is made up of theatre songs, broadside ballads, street cries, consort songs, divisions, masque music, dance tunes, italianate fantasias and a devotional song. It is a collection of music we take delight in and hope that you may do the same, we make no excuse for the jumble!

The most important source of popular dance and ballad tunes is John Playfords The English Dancing Master, a collection of country dances and their tunes, first published in 1651, though many had been popular for over a century. Dances required the same tune to be played several times, making them ideal for divisions (decorations or variations).

Broadside ballads: metred songs and dialogues printed on large sheets of paper (Broadsides). Subjects ranged from: the latest news or scandal to satire, nonsense rhymes, popular plays and mythology. The printed texts were set to popular dance or song tunes.

The Traders Medley to Sellengers Round: is a collection of street cries with bawdy undertones.

Turners Dish of Lenten Stuff to the Friar & the Nun: This ballad is of great interest as it provides information about the playhouses (the Globe, the Swan, the Red Bull and the Curtain), and actors of Jacobean London: the fat fool is William Rowley of Prince Henrys Company, who moved like one of the great porridge tubs going to the Counter; the lean fool is Thomas Greene, chief actor of the Queens Servants at the Red Bull in Clerkenwell; John Shank joined the Kings Men (Shakespeares company) and was well known for his jigs. The ballad also contains street cries and anecdotes. 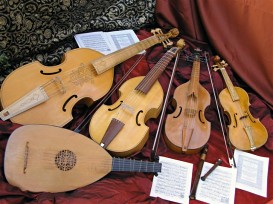 Theatre Songs: Most prolific amongst the composers of theatre music at this time was Robert Johnson who wrote incidental music and songs for the Kings Men, including many of Shakespeares plays, but also for works by Jonson, Middleton, Webster, Beaumont and Fletcher. Included on this recording are two of Ariels magical songs from Shakespeares The Tempest c1611: Full Fathom Five and Where the Bee Sucks. In contrast, both Johnsons Away Delights from the comedy The Captain and John Wilsons Take O Take Those Lips Away, from Shakespeares Measure For Measure, were sung by a boy singer rather than a central character. It may be that Wilson himself performed the song for the original production of c1604. The first folio records a Jacke Wilson as the singer. He would have been nine years old at the time. Another boys song is What Meat Eats The Spaniard? from Blurt Master Constable - or the Spaniards Night Walk (Middleton & Dekker, played by the Children of Pauls c1601). It is a dialogue between three characters Doyt, Pilcher & Dandyprat who bewail the eating habits of the Spanish - they eat no meat except dry pilchards and poor john (salt cod).

The Dark Is My Delight: from Marstons The Dutch Courtesan. The innocent-seeming lyrics take on a different significance if one considers the plays title. Masques were private plays for the Court and the great houses, usually written for special occasions such as weddings or royal visits. They combined spectacular costume and scenery with words, music and dance.

While Dancing Rests, Come Ashore: from Campions The Masque Of Squires, written to celebrate the wedding of the Earl of Somerset to Frances Howard. The songs are filled with good wishes and invocations to Hymen, God of Marriage. No music survives for Peeles masque, The Arraygnment of Paris written in praise of Elizabeth I in 1583. However, frequent stage directions indicate the use of song, music and dance. We have set songs to popular tunes of the time. Fair and Fair, a duet for the lovers Paris and Oenone to All in a Garden Greene, typifying their pastoral idyll; Oenones Lament to Fortune my Foe - a ballad tune associated with gloom and disaster, (often played at executions).

John Wilbye wrote two books of madrigals for the Kitson family of Hengrave Hall in Suffolk. Madrigals are a popular vocal form imported from Italy and are polyphonic in style. We have set one as a consort song in keeping with the direction 'apt both for Voyals and Voyces' on the frontispiece of the 1609 edition.

Another Italian import was the fantasia or fancy  a consort piece where the instrumental parts sing to each other in a style similar to that of a madrigal. In Morleys La Rondinella (the swallow) the melodies interweave like two swallows playing before flying away.

Settings of religious poetry were popular, both in church, and in the home. Miserere My Maker is often attributed to Campion, and is taken from a manuscript collection of c1615. It is a desperate plea from a dying man for intercession. Particularly poignant is the chromatic descent on the words Miserere I am dying.